Welcome to the official website of The Hunt Family Band!

The Hunt Family Band is a four piece band made up of one family – Terry Hunt, Leanne Hunt, Andrew Hunt and Jonathan Hunt.  “HFB” began touring and recording in 2004 and since then have released six albums and have performed at such events as Oklahoma’s International Bluegrass Festival in Guthrie, OK; Silver Dollar City in Branson, Missouri; and The Old Town Temecula Bluegrass Festival in Temecula, CA. Remaining people oriented and presenting quality music are high priorities for The Hunt Family Band.

When this happens, it's usually because the owner only shared it with a small group of people, changed who can see it or it's been deleted.
View on Facebook
· Share

Merry Christmas to you and your loved ones! ... See MoreSee Less

Get the Hunt Brothers latest CD! 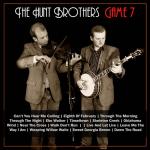